21.11.2017
Current approaches for neural repair at the central nervous system include delivery of neurotrophic factors, drug and cell therapies, and implantable biomaterials. Neural tissue engineering shows increasing promise for the treatment of neural diseases including spinal cord injury, for which an efficient therapy is still missing. At the injured spinal cord, materials such as agarose, gelatin, and chitosan are under investigation as promising candidates, although effective strategies are still missing. On the basis of biologically positive responses of neural cells and tissues when in contact with carbon nanomaterials, we herein investigated the potential of reduced graphene oxide (rGO) in the shape of microfibers as selective substrates for neural tissue engineering with superior guidance performance due to their 3D fibrillary architecture.

Reduced graphene oxide (rGO) is characterized by the presence of oxygen-containing functional groups (mainly hydroxyls and epoxies) in the closely packed honeycomb lattice of sp2-bonded carbon atoms. These groups significantly enhance its hydrophilicity and adsorptive properties, thus boosting its utility in diverse biomedical applications. Although the toxicity of graphene-derived materials is still an open debate, most studies support the existence of a safe range of concentrations for their use in biological scenarios. When evaluated with neural cells in vitro, positive findings from hybrid structures with silica nanoparticles and nanogrids, among others, prompt further investigation of these materials.

In this study, Mayorga et al. have explored the usefulness of bendable microfibers exclusively composed of rGO as supportive guidance substrates for neural growth both in vitro (by neural progenitor cell culture) and in vivo (by implantation in the injured rat spinal cord). First, the physicochemical properties of the microfibers were carefully characterized, including morphology, topography, surface chemical composition, conductivity, and flexibility. After biological functionalization with poly-L-lysine and N-cadherin, the in vitro behavior of cortical neural progenitor cells and meningeal fibroblasts in culture on the microfibers was thoroughly investigated by immunofluorescence and electron microscopy studies. Finally, in vivo studies in the injured rat spinal cord were carried out to both prove their feasible implantation and explore the subacute tissue responses induced in vivo.

The findings point to formation of highly interconnected cultures of central neural cells on the microfiber surface when coated with adhesive biological molecules, such as poly-L-lysine and N-cadherin, but not in their absence. Additionally, by coating with N-cadherin, the colonization of the microfibers by meningeal fibroblasts was dramatically hindered. In vivo studies revealed the feasible implantation of these rGO microfibers in the injured rat spinal cord and their capacity to be colonized by cells without evidencing signs of subacute local toxicity.

The above findings encourage further investigation of these graphene-based microfibers at longer implantation times as part of novel neuroregenerative biomaterials for the treatment of lesions at the central nervous tissue including spinal cord injury. Advances in the development of more efficient neural interfaces would significantly impact society, as the incidence of lesions affecting the nervous tissue (e.g., spinal cord injury, peripheral nerve loss, and Parkinson’s and Alzheimer’s diseases) is increasing. 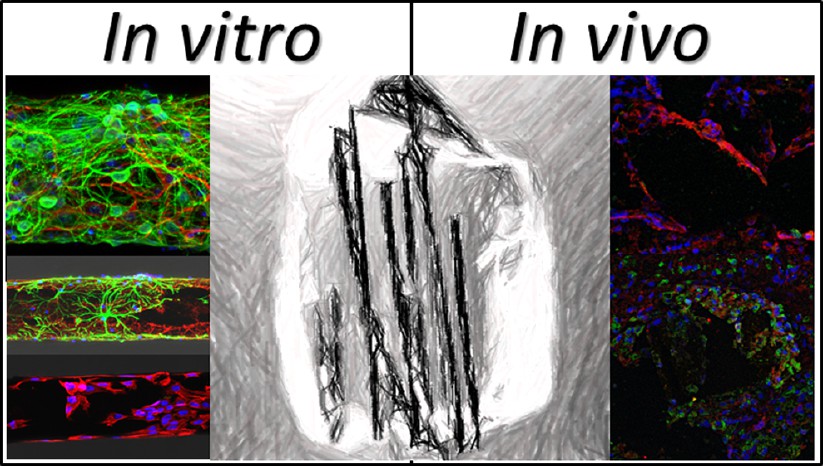 This article has Open Access rights and can be downloaded from our repository, and from the journal webpage: